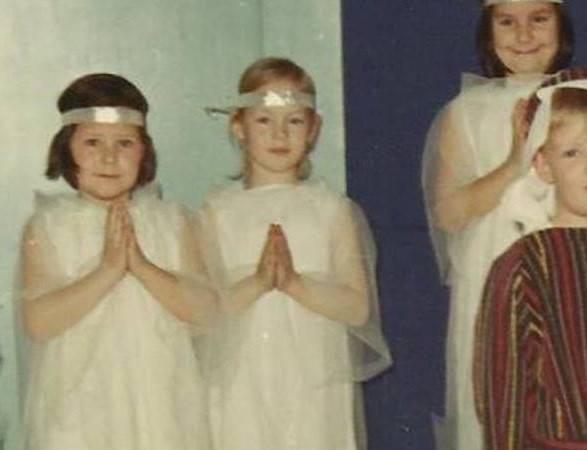 It’s Christmas time again. The festive season seems to come around so quickly each year. For me, it brings nostalgic childhood memories of feeling excited, having family parties and eating far too much chocolate.Who else has memories of waking up on Christmas morning to the delicious aroma of the turkey cooking because it had been in the oven all night? That’s how they did it back in the day!

The Juniper birds thought we would share some photos with you of more innocent times when our biggest worry at school at Christmas time, was whether or not we were going to get picked for the school nativity play.Were you desperate to play a starring role, or perhaps you hated the idea of being picked?

Seeing the photo of me as an angel got me thinking about personal motivation and behaviours we show as children compared to the ones we demonstrate as adults. I was determined to be an angel at infant school, to the point where I sat outside the Head’s office and refused to move, because I hadn’t been selected to be one. I didn’t want to be Mary - that might have involved speaking and getting too much attention or worse, dropping baby Jesus!I knew my limitations. I just wanted to be angelic! Fortunately for me, I was eventually invited to be one (because another child had refused). I don’t know where that stubbornness originated from, as it is not a trait that I recognise in myself now. Back then, I knew what I wanted and was prepared to hold out to get it - how very determined was I?I can’t say the rest of my life has continued in the same vein.Was that strength of character diminished by the pressures of life and growing up? Is the saying true, “Show me the boy/girl at seven and I’ll show you the man/woman”?

Do you recognise these Juniper Angels? We were certainly type cast, in my opinion! Perhaps you have got some old nativity photos, lurking in the attic, that you want to share?

Happy Christmas everyone! Let’s also remember those who may be experiencing difficulties at this time of year, and for whom maybe it is not such a happy celebration.